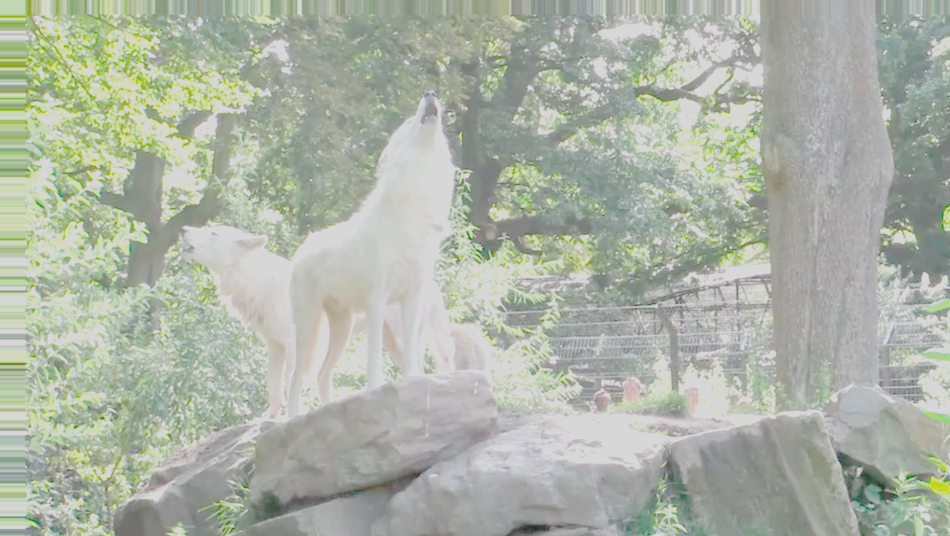 Every first Monday of the month at 12.00 o’clock, the 4.275 civil defence Air-Raid sirens are tested in The Netherlands; a national defence network which function is just to keep the citizens aware of the system. The approximately four minutes length monthly test makes me remember the vulnerabilities of this country.

Every first Monday of the month at 12.00 o’clock, the three Arctic wolfs that lives in Amsterdam Zoo, Artis, are very much aware of the fact of the danger that is going to be announced through the sirens. I’m not sure if is due to a sort of internal clock or animal instinct that predispose them, but the fact is that minutes before the sirens project their hair-raising sounds in the air, the wolf family starts to get uncomfortable. The animals circulate agitated around the little hill that conforms one of the two cages where they live. At the right moment the alarm system begins, the wolfs run to create a formation on the top of the hill, lifting the heads towards the sky, inflating their throats, opening their snouts and letting run a deep an overwhelming hulling performance.

Our intention is to create a time-specific performance for that moment.
A performance that is already taking place.

Readymade is a well known 20th-century avantgarde artistic practice, developed mainly in visual arts. It consists of taking every-day, non-artistic objects or events, their transposition in the artistic context and declaring them for works of art. This practice is a critique and questioning of the art institutions done by Duchamp, through Fluxus, Warhol, minimalist dance, and the numerous contemporary, post-modern artists. However, in performing arts, ready-made appears sporadically and only as ‘partly ready-made’. Some of the artists using it are Augusto Boal, Rimini Protokoll, Jérôme Bel, etc. We have decided to introduce this practice in the local theatre context and convey it consequently and literally till the final instance.

White howling is, in that way, a literal invitation to gather in Amsterdam’s Artis Zoo to visit the wolf cages on a very specific day at a very particular moment on the day, the first Monday of the month at 12.00 o’clock. However, that invitation is done in the frame of theatrical context.